Ultrasound is sound with frequencies above the level of human hearing. NOTE: Frequencies are expressed in Hertz(Hz)

NOTE: When calculating equations be sure your units complement each other.
•    Meters (m) and seconds (sec)
•    Millimeters (mm) and microseconds (µsec)

Ultrasound Physics: Basics of Sound - Transducers
Ultrasound Waves are produced by Piezoelectric transducers, which use polarized polycrystalline ferroelectric ceramic materials to convert pressure energy into mechanical energy and vice versa.
•    The conversion of electrical energy into mechanical energy – transmission of the sound beam
•    The conversion of mechanical energy into electrical energy – receiving the reflected beam information
•    The piezoelectric effect was discovered by the Curie brothers in the 1800’s
•    Natural piezoelectric crystals exist (i.e. quartz and tourmaline) but are typically too weak for diagnostic imaging
•    Typically Lead Zirconate Titanate (PZT) is utilized for transducer crystal elements
•    The Curie point (Tc) of PZT is more than 200°C
•    Cannot be heated beyond Curie point or will lose its polarization (no autoclave)

Sound Waves - Propagation
As sound propagates (travels), the sound waves react to tissue interfaces in a number of ways. Those behaviors include the following:
•    Through Transmission
•    Attenuation•    Refraction
•    Diffraction


Through Transmission
Through transmission refers to the continued propagation of sound relatively unchanged from one medium to another through a tissue boundary. The path of the sound beam continues forward in a straight line without change in speed or direction.

Attenuation ∙ Reflection
Reflection of sound is the return of echoes from a tissue boundary or interface. Reflection can occur in whole or in part. The strength of the returning echoes determine gray-scale imaging and the display of the ultrasound image.

Attenuation ∙ Absorption
Absorption refers to the process by which a medium takes in sound energy when sound waves are encountered, as opposed to reflecting the energy. Part of the absorbed energy is transformed into heat and part is transmitted through the absorbing medium. The strength of the remaining propagating sound wave is decreased.

Attenuation ∙ Scatter
Scatter occurs when ultrasound waves encounter a medium with a nonhomogeneous surface.  A small portion of the sound wave is scattered in random directions while most of the original wave continues to travel in its original path.

Refraction
Refraction is the change in direction of propagation of a sound wave. This occurs as a result of a difference in propagation speeds between two mediums at a tissue boundary or interface (i.e. Soft tissue to fluid).

Diffraction
Diffraction is the spreading of a wave, around the edge of an object.

Ultrasound Physics: Basics of Sound - Acoustic Parameters
Sound is described by distinct parameters which are common to ALL wave types. These parameters describe how sound waves are comprised and how they interact with surrounding tissue interfaces:
•    Frequency
•    Period
•    Amplitude
•    Intensity
•    Power
•    Wavelength
•    Propagation Speed

Ultrasound Physics: Basics of Sound - Echogenicity
Gray-scale imaging is produced by the returning echoes received by the ultrasound transducer. The brightness of the returning echo corresponds to its strength and anatomic location of the tissue interface encountered by the ultrasound pulse. The description of the echo strength and how it appears on the ultrasound image is referred to as its echogenicity. Echogenicity descriptions include:
Echogenicity - Anechoic
Anechoic structures show up as black on 2D ultrasound. Tissues exhibiting anechoic characteristics on ultrasound are comprised of fluid. These can include blood vessels, heart chambers containing blood, fluid such as amniotic sac, ascites or pleural/pericardial effusions and other fluid collections (i.e. cysts).

Echogenicity - Hypoechoic
Hypoechoic structures show up on ultrasound as darker areas of gray when compared to surrounding structures. Tissues exhibiting hyperechoic characteristics on ultrasound are typically comprised of less dense soft tissue and organs or masses with a fluid component (i.e. Liver, Kidneys).

Echogenicity - Isoechoic
Isoechoic structures show up on ultrasound as the same or similar appearance to those of the surrounding tissue or structures. 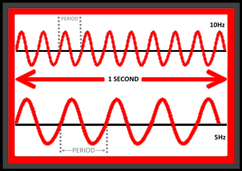 Acoustic Variables include the following:
Acoustic Variables - Pressure
Pressure is described as the concentration of force in an area. It is expressed in units called pascals (Pa). As sound waves propagate through a medium the pressure in the wave will increase and decrease (compression and rarefaction) and can affect how the wave propagates and the surrounding tissues, as well as how the return echoes are displayed.

Acoustic Variables - Density
Density is described as the concentration of mass in a volume or concentration of matter. It is expressed in units of kg/cm3. As sound travels from through tissues with varying density the echoes received back to the receiver will display different image characteristics based on the strength of the reflector and this will affect the 2D ultrasound image displayed. NOTE: Density IS NOT the same as Stiffness

Acoustic Variables – Distance
Distance is described as a measure of particle motion. It is expressed in units of length such as centimeters, meters, inches, feet and miles.
As a sound wave propagates through a medium, the surrounding particles are set into motion. NOTE: Sound waves cause particle motion but DO NOT carry particles from one place to another. Sound waves only carry energy not particles or any other material.

Acoustic Variables - Temperature
Temperature is described as the measure of heat. It is expressed in units of degrees in Fahrenheit or Celsius. Temperature can be affected by the propagation of the sound wave. This occurs especially with increased beam power and intensity, the surrounding tissues can increase in temperature and cause tissue cavitation (microbubbles) to occur.

Acoustic Variables – Diagnostic Ultrasound
Sound waves are safe. There are no known biological effects of diagnostic sound waves. When used at therapeutic levels or with higher output power and beam intensity, the ultrasound beam can cause changes to the tissue due to these acoustic variables. Output power must be set to the ALARA standards which means “As Low As Reasonably Achievable”. This standard ensures that the acoustic variables remain within safe parameters reducing the likelihood of bio-effects from the sound beam and tissue cavitation.


Acoustic Parameters
Sound is described by distinct parameters which are common to ALL wave types. These parameters describe how sound waves are comprised and how they interact with surrounding tissue interfaces:


Frequency is inversely related to penetration/depth.  Frequency is directly related to axial resolution (The ability to recognize two different objects at different depths along the axis of the ultrasound beam). This means that higher frequency improves image quality. Frequency is equal to the number of cycles in the pulse.

Amplitude is expressed in units as they relate to the Acoustic Variables:
Acoustic Parameters - Power
Power is described as the rate at which work is performed, or the rate of energy transfer.
Acoustic Parameters - Intensity
Intensity is described as the concentration of energy in a sound beam.
Intensity depends upon both the power and the cross sectional area of the beam. Intensity is equal to the beam’s power divided by the beam's cross sectional area.

NOTE: When calculating equations be sure your units complement each other. 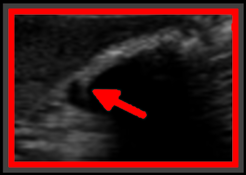 Acoustic Artifacts – Shadowing
Shadowing occurs when a structure has a high level of attenuation. Structures deep to it will not be seen because there will not be a sufficient amount of returning echoes due to the highly attenuating structure.

Acoustic Artifacts – Enhancement
Enhancement is the opposite of shadowing. It occurs when a structure has a lower than normal level of attenuation. Structures deep to it will appear hyperechoic because there will be a greater than normal amount of returning echoes due to the decreased attenuation of the structure.

Acoustic Artifacts – Edge Shadow
Edge shadowing occurs when imaging a round structure. There is a small amount of refraction at the edges. When this occurs, the sound beam does not reflect and is not recorded. A shadow is shown on the displayed ultrasound image at the edges of the round structure.

Acoustic Artifacts – Propagation Speed Error
An ultrasound machine assumes that the medium the sound wave is traveling through is soft tissue, with a propagation speed of 1540 m/s. If the sound beam travels through material that has a different propagation speed, there will be a time/distance error. Reflectors will be displayed at incorrect depths.

Acoustic Artifacts – Reverberation
Reverberation is usually created from sound bouncing between two strong reflectors. There will be multiple, equally spaced echoes in a line displaying deep to the reflectors that lie parallel to the sound beam.

Acoustic Artifacts - Ring Down vs. Comet Tail
Ring Down and Comet Tail artifacts are types of reverberation artifacts and are often misunderstood and thought to be the same. The primary difference between the two artifacts is the display of discretely separate echoes.

Acoustic Artifacts – Comet Tail
Comet tail artifacts involve two closely spaced reflective interfaces, which generate closely spaced separate and discrete echoes. Comet tail artifacts also show a decrease in the amplitude of the echoes due to attenuation, which results in the width of echoes being increasingly diminished. The result is an artifact caused by the principle of reverberation, but with a conical or triangular shape. This artifact occurs primarily when the ultrasound beam comes into contact with metal objects and small calcific/crystalline highly reflective objects.

Acoustic Artifacts – Mirror Image
Mirror Image artifacts occur when there is a strong reflector in the path of the beam. A great example is the diaphragm. Sound is reflected at an oblique angle and then returns to the machine.

Acoustic Artifacts – Aliasing
Aliasing is created when the Pulse Repetition Frequency (PRF) is not high enough and the Nyquist limit is exceeded. The color and/or Doppler will “wrap” around and create an aliased effect on the waveform or color image.

Acoustic Artifacts – Range Ambiguity
Range Ambiguity is created when an echo reflection from a deep reflector arrives after another pulse is already created.  When the Pulse Repetition Frequency (PRF) is too high the machine assumes that the echo came from the second pulse and displays the echo too shallow and in the wrong location on the image.

Acoustic Artifacts – Multi Path
Multi-path artifact is due to refraction at a strong reflector and occurs when the angle of incidence is acute. This results in a reflector positioned incorrectly on the display because the path that the echo returned on is longer that the path the initial beam took to get to the reflector. This causes a poor image, rather than a specific misplaced echo.

Acoustic Artifacts – Side Lobes
Side lobe artifacts are caused by low energy “side lobes” of the main ultrasound beam.  When an echo from a side lobe beam becomes strong enough and returns to the receiver, it is “assigned” to the main beam and displayed at a false location.  Side-lobe artifacts are usually seen in hypoechoic or echo-free structures and appear as bright and rounded lines.
MODULE 4 - ULTRASOUND SYSTEMS 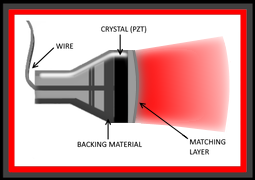 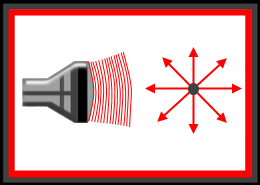 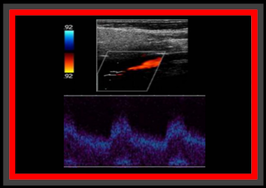 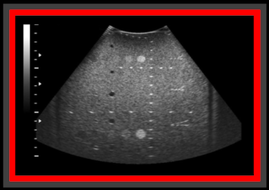 iHeartEcho is a Division of All About Ultrasound, Inc.